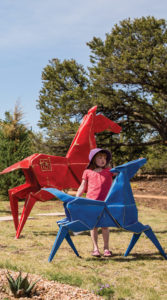 A premiere art exhibit of origami sculptures in bronze, steel and aluminum sculptures is making its Southern California debut at the Rancho Santa Ana Botanic Garden in Claremont on October 20th 2018 and continuing through April 14th, 2019. T he Rancho Santa Ana Botanic Garden officially welcomes Origami in the Garden², a series of large-scale metal sculptures inspired by the Japanese art of paper folding. Created by Santa Fe-based artists Jennifer and Kevin Box, the exhibition will feature garden installations and gallery works featuring the Boxs’ own compositions as well as collaborative works with some of the world’s top origami artists.

Each of the sculptures in the Origami in the Garden² collection originated with a single piece of folded paper created by some of the world’s most noted origami artists, including Tim Armijo, Michael G. LaFosse, Beth Johnson, Robert J. Lang,  and Te Jui Fu. To recreate each piece for Origami in the Garden², Kevin Box pioneered a unique process of lost wax casting and fabrication to capture the delicate details of folded paper in museum-quality metals. 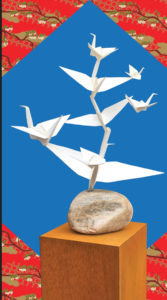 “We are excited to showcase Origami in the Garden², an outdoor sculpture exhibition of larger-than-life origami creations by Jennifer and Kevin Box,”  said David Bryant, Manager of Communications, Design and Exhibitions. “These incredible sculptures, many created in collaboration with world famous Origami artists, will transform our Garden’s landscapes and invite audiences to experience the evocative connections between art and nature. Originating in Japan and celebrated around the world, Origami synthesizes elements of art, science and natural themes in creating expressive works from single sheets of paper. The exhibition brings these concepts to life in the transportive beauty of Rancho Santa Ana Botanic Garden.”

Origami in the Garden² is free with general admission. Related family activities, lectures and workshops will accompany the exhibition, including an opening weekend celebration on October 20th and 21st. For more information including the latest schedule of events please visit www.rsabg.org.

Friday, October 19: Exhibition Opening at the annual Majestic Oak Dinner. Our major donors will join us for a walking cocktail reception through the pieces of the collection and a seated dessert with a guest speaker to officially open the exhibit.

Saturday, October 20: Public Opening of Origami in the Garden² with audio and docent led tours available. Public Opening of indoor gallery exhibition, Unfolded, and screening of the movie The Origami Revolution.

Sunday, November 11: First in the series of Second Sundays, sponsored by the City of Claremont’s Community-Based Organization Grant Program. RSABG is collaborating with Scripps College to present a public lecture to the Claremont community and a hands-on workshop with world-renowned origami artist Dr. Robert Lang. http://www.langorigami.com/

Friday, November 23: “Green Friday” offers free garden admission to all, encouraging families spending the Thanksgiving holiday together to explore the Origami in the Garden exhibition.

Origami in the Garden² is a monumental sculpture exhibition created by American artists Jennifer and Kevin Box. Each sculpture is inspired by a blank piece of paper and has been transformed into museum quality metals by Kevin Box at his studio in Santa Fe, N.M. Individually, these enchanting sculptures inspire wonder and create broader connections to life and the world around us. Collectively, the exhibition tells the story of creativity and the art of making something out of nothing. The exhibition comes to Rancho Santa Ana Botanic Garden after successful runs at Tucson Botanical Gardens and Lewis Ginter Botanical Garden. For more information on artist Kevin Box, visit outsidetheboxstudio.com/about/bio.

This spring and summer Rancho Santa Ana Botanic Garden (RSABG) is abuzz with activities including the Butterfly Pavilion and David Rogers’ Big Bugs art exhibition. A new event—Bugs and Brews offers adults an opportunity to enjoy California’s native garden and party, too.

The Garden is opening the gate Thursday nights from 6 until 8:30 p.m., for Bugs and Brews, May 24 through June 21, 2012. Guests 21 and up are invited to enjoy evening strolls in the Garden, view David Rogers’ Big Bugs and mingle with others over beers for just $10 for RSABG members and $15 for public. Local brothers Curt and Andy Dale bring their mircobrews to California’s native garden and live music provides a soundtrack to the Big Bugs playful art exhibit. Tickets available at the gate or by phone at (909) 625-8767 ext. 224.

The opening weekend of the third annual Butterfly Pavilion (May 12 and 13) at RSABG welcomed approximately 500 visitors. The seasonal exhibit, featuring Southern California native caterpillars and butterflies along with their habitat plants, is open daily 10 a.m. until 3 p.m., through July 29, 2012. Tickets are $2 in addition to standard Garden admission for all guests 3 and over..

David Rogers’ Big Bugs, a traveling exhibition of gigantic proportions, is on display at the Garden until July 15, 2012. Big Bugs is a collection of huge sculptures of arthropods created by carving and polishing beautiful hardwoods and manipulating young willow saplings. The exhibition is free with standard Garden admission. A free audio tour is available; please check in at the admission kiosk for details.

Rancho Santa Ana Botanic Garden, founded in 1927 by Susanna Bixby Bryant, is the largest botanic garden dedicated exclusively to California’s native plants. The Garden is located on 86 acres in Claremont, approximately 35 miles east of Los Angeles. RSABG, a private, nonprofit organization, offers educational programs and special events throughout the year and is home of the Botany Department for Claremont Graduate University. The Garden offers a superb selection of California native plants for sale at Grow Native Nursery in Claremont and West L.A. (Westwood).