WHAT: The Winter’s Tale. 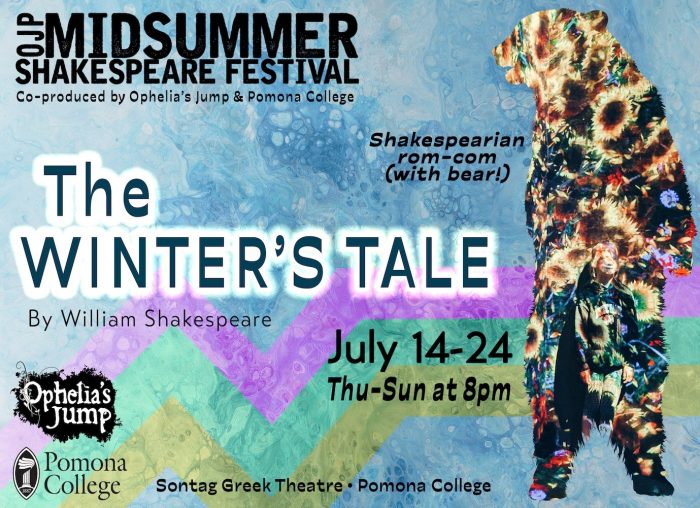 Prior to the performance, the venue will be open early to accommodate picnickers. Concessions including craft beer, wine and snacks will be available. There will also be a nightly Green Show, a pre-show entertainment at this iconic venue. (The Green Show originated in Elizabethan times.)

The Winter’s Tale is unique in the annals of romantic comedy. It starts off like a tragedy, spins into comedy, and concludes with a fairy-tale happy ending. The play also contains the most famous stage direction in the history of theatrical literature. (Without giving away too much, it involves a bear.)

King Leontes of Sicilia and King Polixenes of Bohemia have been life-long buddies, to the benefit of both their realms. One day, Leontes decides that his Queen, Hermione, is much too friendly with Polixenes and groundlessly suspects her of infidelity. Leontes explodes into a jealous rage which will have dire consequences for his loved ones. Hermione and Leontes’ infant daughter, Perdita, is banished to Bohemia and left to die, but is saved by a passing Shepherd and his son. She grows up into a great beauty, attracting the romantic attention of Florizel, Princess of Bohemia. Meanwhile, their families’ royal houses, beset by grief and regret are still at odds. Is there any hope for the love of Perdita and Florizel? It will take an act of miraculous magic to make things right, if the lovers are ever to achieve their happily-ever-after.

Caitlin Lopez directs. She is the Founding Associate Artistic Director of Ophelia’s Jump Productions. An actor and improvisor, she was a company member at Spectacles Improv Engine where she co-created teams and forms steeped in narrative genre work such as The Mechanicals, The Blankety Blank, and The Illegitimate Stage. Directing credits with OJP include 33 Variations, Twelfth Night, The Complete Works of Shakespeare Abridged, Hedwig and the Angry Inch, Much Ado About Nothing, and As You Like It. She is a graduate of California State San Bernardino with a Bachelors in Acting and will be attending Ohio University in the Fall, pursuing an MFA in Directing.

It may be called The Winter’s Tale, but a romance with a fairy-tale ending is perfect for a summer evening.

Ophelia’s Jump is a non-profit Performing Arts Theatre producing plays, staged readings, the Midsummer Shakespeare Festival in Claremont, and hosting youth and adult improv and acting classes. Ophelia’s Jump Productions was founded by artists and educators who believe that the purpose of theatre is to create unending conversations, spark imagination, incite conscience, and elicit a visceral response. Ophelia’s Jump aims to invigorate the creativity and intellect of the community by working with local emerging artists. Ophelia’s Jump is a 501c3 non-profit organization.

Located in Claremont, California, Pomona College is widely regarded as one of the nation’s leading liberal arts colleges. Established in 1887, Pomona is known for its quality academic programs, a challenging curriculum, close relationships between students and faculty, a range of student research and leadership opportunities, and a strong commitment to the arts. Additional information available at www.pomona.edu