Hotels in Claremont, California, are partnering with the town’s annual Midsummer Shakespeare Festival to offer a “Room and Bard” package that includes festival tickets and gourmet treats to enjoy during the performance under the stars. 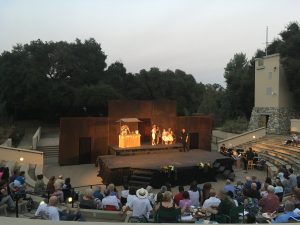 The fifth annual Midsummer Shakespeare Festival presented by Ophelia’s Jump Productions runs July 12-22, 2018, Thursday to Sunday evenings at the Sontag Greek Theatre at Pomona College. This year’s shows, performed in repertory, are Romeo and Juliet, performed in English and American Sign Language (July 13-15-19-21), and As You Like It (July 12-14-20-22).

The Discover Claremont “Room and Bard” package includes a comfortable guest room; two tickets to one performance; a selection of gourmet treats and a split of wine, packed in an insulated tote; and padded seats to borrow for the evening. The value of the two tickets, two chair rentals, picnic with split of wine, and take-home tote is $136.

Reservations must be made by phoning the participating properties directly and requesting the “Room and Bard” package. The package is subject to availability at the following Claremont hotels:

Guests at DoubleTree will enjoy a picnic specially prepared by the hotel’s chef. Packing House Wines will provide wine and picnic options for guests of Hotel Casa 425, Claremont Lodge, Knights Inn and Motel 6.

For tickets and additional information about the Midsummer Shakespeare Festival, visit https://www.opheliasjump.org/

Ophelia’s Jump Productions presents the Annual Midsummer Shakespeare Festival with HAMLET and MUCH ADO ABOUT NOTHING. The productions will run July 13-23, 2017 at Sontag Greek Theatre at Pomona College. The festival, co-sponsored by Pomona College, includes exhibits, arts and crafts by community businesses and organizations. Tickets are available at opheliasjump.org, or by calling 909-734-6565.

This year’s Annual Midsummer Shakespeare Festival celebrates what many regard as Shakespeare’s comedic masterpiece, MUCH ADO ABOUT NOTHING. Blending elements of drama and comedy, this tale teaches that “love will have its way no matter how much we try to fight it.” In HAMLET, the epic tale of revenge gone awry will be set in the influential period following the First World War, under the stars at the beautiful Sontag Greek Theatre, an outdoor amphitheater originally built in 1910 and renovated in 1997. The productions will be performed in repertory, alternating each night.

Set in the Kingdom of Denmark, Hamlet dramatizes the revenge Prince Hamlet is called to wreak upon his uncle, Claudius, by the ghost of Hamlet’s father, King Hamlet. Claudius had murdered his own brother and seized the throne, also marrying his deceased brother’s widow. Hamlet is ranked among the most powerful and influential tragedies in English literature, with a story capable of “seemingly endless retelling and adaptation by others”.

MUCH ADO ABOUT NOTHING

Get ready for the verbal sparring match of the ages! Benedick and Beatrice have sworn off love… and each other. But when their friends and family attempt to con them into a romance, will these acid-tongued cynics take the bait? Mistaken identities, love, hilarity, honor, shame, and partying till the sun comes up are all ingredients for a great time in this rollicking production!

Now a Claremont tradition, Ophelia’s Jump’s Midsummer Shakespeare Festival artfully presents tragedy and comedy under the stars in a beautiful outdoor setting. Each performance opens nightly with a 30-minute Green Show – an entertaining prelude to the evening’s main performance.  We invite you to bring your own picnic and don’t forget a small blanket or cushion for added comfort.

On Saturdays, arrive early and enjoy local musicians, artists, and crafts before settling in for an evening of timeless Shakespearean classics. Enjoy festival booths, crafts, and vendors starting at 5:30 p.m. Local restaurants and businesses will be offering special in-restaurant dining menus and selected take-out options to enjoy prior to all performances.

Ophelia’s Jump is a theatre company focused on producing highly-regarded, award-winning works that leave audiences asking questions and discussing big ideas — theatre that invites you to leap into the drama. Our mission is to produce both creative new interpretations of classical and award-winning works, and also new works by talented local and regional artists.

Located in Claremont, California, Pomona College is widely regarded as one of the nation’s leading liberal arts colleges. Established in 1887, Pomona is known for its quality academic programs, a challenging curriculum, close relationships between students and faculty, a range of student research and leadership opportunities, and a strong commitment to the arts.